Varieties of Influence, or What Is This Thing Called Noh 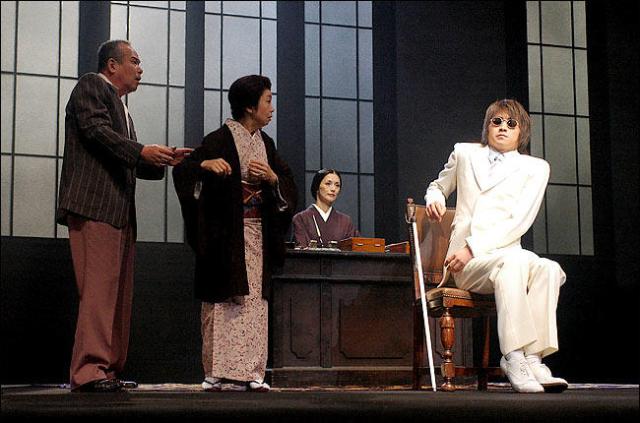 From the Ninagawa production of Mishima’s Yoroboshi

On an airplane this past weekend, I found myself reading several of the “modern Noh plays” of Yukio Mishima.  Each of these short works is based on a particular classic Noh play, transposed into a modern setting and augmented to explore more characters or emphasize new angles.  For example, in the classic The Damask Drum and in Mishima’s version, an old man in love with a beautiful younger woman is tricked into banging a drum that does not sound, in a vain effort to call forth his beloved, but in Mishima’s play, the drum eventually does sound; the woman, who seeks out the man after his suicide and begs him to try the drum again, seems to want to hear it but cannot.  In the classic Yoroboshi, the blind beggar has a vision of the sun connected with a Buddhist ritual; in Mishima’s version, the blind boy cannot escape the vision of fire bombs at the end of World War II, which he identifies with the end of the world.  Structurally and in terms of literary style, these are not Noh plays at all but were written to be performed by shingeki troupes, using Western performance styles.  One article in Modern Japanese Theatre and Performance, edited by David Jortner et al, reports that when Mishima allowed an experimental director to use Noh actors and music in the performance of one of his plays, “he felt like a father submitting his child to the scalpel of a dubious plastic surgeon.” 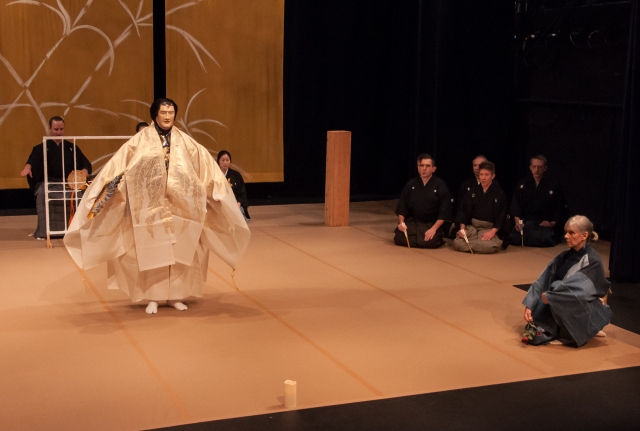 Works like Mishima’s, to my mind, occupy one end of a continuum on which contemporary theater artists have appropriated elements of Noh for their own creative purposes.  A Western-style drama that tells a story from a classic Noh play could be compared to the reharmonization of a “standard” by a jazz musician, in that a person who knows the original can pick out the story despite a difference in presentation.  At the other end of the same continuum is the kind of work Theatre Nohgaku so often stages, work in which a modern playwright and ensemble tell an entirely new story while rigorously following the conventions of Noh poetics, dramatic structure, choreography, and music.  To continue the analogy to jazz, this approach might be considered similar to deploying a familiar set of harmonies under a new melody.  Among the playwrights who have worked in this vein in recent years are Greg Giovanni (Pine Barrens), David Crandall (Crazy Jane), and Deborah Brevoort, whose Noh play about Elvis Presley (Blue Moon Over Memphis) was performed in traditional style with music by Richard Emmert in Bloomsburg earlier this month.  Between the two ends of this continuum lies much of the work undertaken by Theatre of Yugen in San Francisco for almost 35 years:  original productions by Theatre of Yugen have incorporated elements of Noh choreography and vocalization but have not adhered strictly to the narrative structures or musical conventions of Noh.

Another Incarnation of This Lingering Life

This Lingering Life by Chiori Miyagawa is much closer to Mishima on the spectrum of adaptation than to the playwrights associated with Theatre Nohgaku, insofar as Miyagawa, like Mishima, refashions traditional stories in a Western mode.  My one conversation with new Theatre of Yugen artistic director Tanroh Ishida suggested that he plans to steer that theater in a similar direction, borrowing stories from Noh but making productions “less Japanese” than in the past. 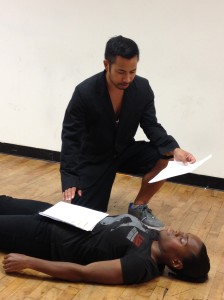 The world premiere production of This Lingering Life in San Francisco did incorporate some Noh styling, by virtue of the fact that not only director Jubilith Moore but also all members of the cast had had years of training in both Noh and Western performance styles.  The New York premiere by Cake Productions will offer audiences a different experience:  this time the performance will be entirely Western.  According to Chiori Miyagawa, the actors in New York “are responding to the universality of the stories and theatricality of [the play].”  Only one member of the New York cast has training in Noh:  Norman Muñoz, who played multiple roles in the world premiere in San Francisco, will assume other roles in the New York production.

When I wrote to Chiori Miyagawa with the idea for this blog post, she was especially delighted to see her name in close juxtaposition with Mishima’s but pointed out one respect in which her work differs markedly not only from his, but also from that of most other playwrights whose work is influenced by Noh.  In the culture of Noh, drama has always alternated with humor, but in a traditionally performed Noh, the humor is sandwiched between the dramatic parts—in the “kyogen interlude” between acts   and in short kyogen plays performed between the Noh plays in a cycle.  In most modern plays influenced by Noh, the same partition exists, with a comedic sequence between acts (as in Greg Giovanni’s Pine Barrens or Erik Ehn’s Cordelia) or between plays (as in the day-long production of Erik Ehn’s Cycle Plays by Theatre of Yugen, in which Ehn’s plays alternated with short, light-hearted acts by other local theater troupes).  By contrast, This Lingering Life is permeated with humor throughout, reflecting Miyagawa’s belief “that every moment we live will eventually become both comedy and tragedy.”

Readers of this blog who will be in or around New York City between mid-September and early October can find out more about the upcoming East Coast premiere of This Lingering Life here: http://thislingeringlife.weebly.com/

Readers interested in learning which classic Noh plays Miyagawa has adapted for her work can refer to my earlier post entitled “Nine Noh Play Synopses in One English-Language Blog Post.”  (See the list of Recent Posts on the upper right side of this page.)

Readers intrigued by the idea of Yukio Mishima’s Noh plays can find several of them in the inexpensive English-language edition entitled Five Modern No Plays, published by Vintage and readily available to your local independent bookseller.

An evocative review of a production of two Mishima plays by the Ninagawa Company of Tokyo at Lincoln Center in 2005 is here:  http://playgoer.blogspot.com/2005/08/playgoer-review-mishima-modern-noh.html

An earlier version of Deborah Brevoort’s Blue Moon Over Memphis was published in The Best American Short Plays 2003-2004 by Applause Books.  The latest version, adapted by Brevoort and Richard Emmert for production in full Noh style, is not available in book form, but there are quite a few posts about the project on the blog of Theatre Nohgaku here:   http://theatrenohgaku.wordpress.com/?s=blue+moon+over+memphis

This entry was posted in Theatre Nohgaku, This Lingering Life. Bookmark the permalink.